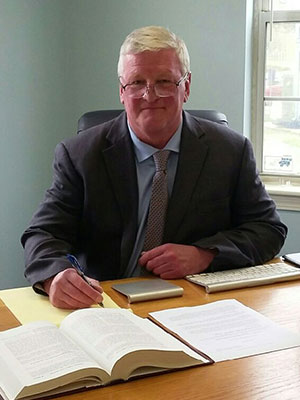 Attorney Doyle earned a Bachelor’s Degree from the University of Southern Maine in Portland, Maine, and earned his law degree from the Massachusetts School of Law in Andover, Mass.

Before becoming a lawyer, Attorney Doyle was a Master Plumber in the Chelmsford/Lowell area of Massachusetts operating a plumbing business.  In 1993, Attorney Doyle was injured very badly; he lost his plumbing business and everything else he had acquired up to that point.  Life spiraled downward.  After years of disability, pain and destitution, Attorney Doyle started college at Valencia Community College in Orlando, Florida, and has been on an upward trend ever since; he passed the Massachusetts bar exam in 2010, one week after his 50th birthday.  In February 2012, Attorney Doyle passed the New Hampshire bar exam two weeks after his 52nd birthday. Through the support of family, a lot of hard work and perseverance, Attorney Doyle has overcome immense adversity and considers himself very fortunate, despite the challenges.

Attorney Doyle will fight for your rights with the same tenacity, perserverance and dedication.